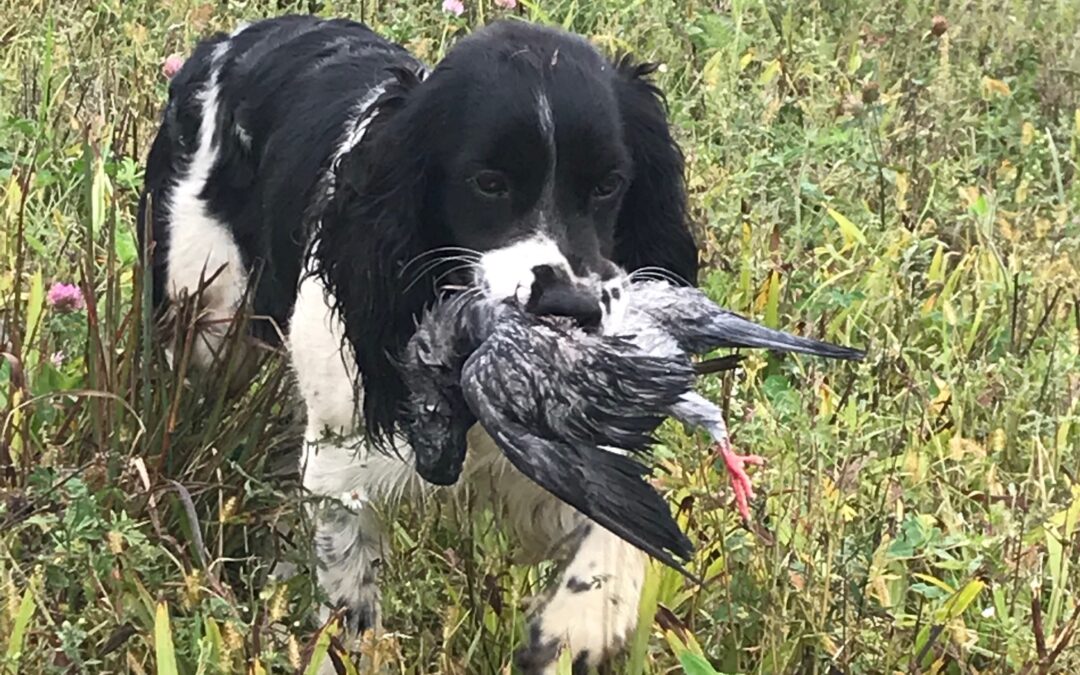 There are a number of common setbacks that hunters encounter when training their retrievers at home.  The most common training pitfalls are discussed here, as well as how to overcome them.

Hunting Too Soon
Hunters often become impatient and want to expose their dogs to the hunt as soon as possible.  However, dogs under 10 months of age have nothing to gain from this experience, and the risk of serious training setbacks, such as becoming gun-, water-, or bird-shy is high.  Instead, be patient and continue to build basic skills while mimicking controlled hunting scenarios at home until your dog is ready for a real hunt.

Emphasizing Retrieves over Steadying
A common misconception is that working on steadying too soon will result in a dog that is unenthusiastic about retrieves.  However, this theory is not true, especially when trained properly and with gentle techniques. Any retriever with good bloodlines will inherently mark and retrieve, while not retrieving is the skill that requires work.  Practice non-retrieves early in your dog’s training by picking up half of all bumpers.

Repetitive, Meaningless Marks
If your dog is enthusiastic and driven about early retrieves, do not throw too many marks during early sessions.  As soon as your retriever is reliably chasing, marking, and retrieving, make the marks more difficult by having them fall in different terrain, such as tall grass, water, or in high crops.  It is important to avoid excessive marking, as it can create bad habits rather than instill good behaviors.

Too High of Expectations
Never set your dog up to fail; instead, make sure every time you engage in a training session with your pup, he or she is set up to win.  Modify your dog’s training in order to ensure success each time, no matter the drill. Simplify the training concepts and break them up into smaller steps, if needed.  Remember that dogs learn best when each skill is broken down into individual components before being linked together.

Lack of Transition Training
Hunters often want to test their dog’s skills as soon as they can.  However, in doing so they sometimes set their dogs up for failure. One common mistake that hunters make is rushing through training without enough repetitions, causing confusion and frustration for dogs during the first hunt.  A second mistake is not connecting the dots during training by going straight from yard work to a real-life hunting scenario.

Ignoring Lifelong Learning
Dogs should be reinforced in their daily behaviors outside of the field, particularly in their daily lives.  For instance, is the manner in which people play with your dog developing bad habits? Are children tossing meaningless, repetitive retrieves that are ruining your dog’s steadiness?  Is your dog being encouraged to run, swim, rough house, and chase, to the detriment of his or her behavior on the hunt? It is important to establish rules in your household for how your dog is to be interacted with, particularly during playtime.  Educate your visitors on your dog’s boundaries, and control his or her environment, if necessary.

Delaying the Introduction of Skills
In general, the earlier you introduce a skill to your dog, the better.  Two common mistakes that hunters make is delaying the introduction of whistles and hand signs.

Improper Timing
Finally, consistent timing is necessary when training a dog, for both praise and correction.  The most effective dog training will occur when the animal receives reward or punishment at the exact moment the behavior (good or bad) occurs.  Waiting too long teaches the dog to associate the most recent behavior with the praise or punishment, and not necessary the action being praised or corrected.  Another important component of proper timing is to administer the praise or correction in the exact location where the behavior took place. If necessary, return the dog to location, make the correction, and re-emphasize the command.  Remember, reward goes further for a dog than correction, and a properly timed treat can make all the difference in building your dog’s confidence.